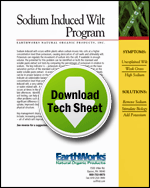 Sodium induced wilt occurs within plants when sodium moves into cells at a higher concentration level than potassium, causing desiccation of cell walls and ultimately wilt.

Potassium can regulate the movement of sodium into the cell, if available in enough volume. The potential for this problem can be identified on both the standard and soluble paste extract soil tests by comparing the percentages of potassium in relation to sodium. The key indicator is potassium should never fall below sodium on the base saturation portion of the standard soil test or as a percentage of concentration on the water soluble paste extract.

A word of caution here: often the base saturation levels can be in proper balance on the standard test, while the paste extract test will actually indicate an undesirable balance. Often the paste extract will show sodium is at a higher concentration level than potassium, a clear indication of an increased risk for sodium induced wilt, a very subtle problem in the field, and often misdiagnosed as environmental or water related wilt. A very good indication of this problem in the field is when wilt occurs at times in the day when wilt should not normally occur, such as early morning or late afternoon. Identifying the problem both in the field, and with help of comprehensive soil testing, can help reduce a significant amount of plant stress that can often lead to other problems such as disease attack.

Removing the sodium from the soil will make a significant difference in the health of soil microbial populations, allowing for better nutrient uptake, improved checks and balances for the control of pathogens, and a better soil physical structure.

Key management steps that will improve soil conditions to prevent sodium induced wilt include: increasing potassium (and often calcium solubility) levels, and removing sodium — all of which will improve the environment for soil biology to proliferate.

Download the Tech Sheet for program specifics and recommendations.