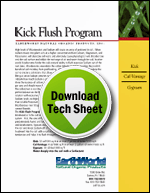 High levels of bicarbonates and Sodium will cause an array of problems in soil. When sodium moves into plant cells at a higher concentration than Calcium, Magnesium, and Potassium it will desiccate cell walls and ultimately cause physiological wilt.

Bicarbonates seal the soil surface and inhibit the exchange of air and water through the soil. In other words, bicarbonates hinder the soils natural ability to flush excessive Sodium out of the root zone. Bicarbonates exacerbate the cation imbalance, not to mention they restrict beneficial soil microbes from proliferating. When microbes multiply they flocculate the soil to create a soil matrix that allows water to flush through the root zone.

Being a cation, Sodium attaches to the soil colloid therefore the standard soil test will indicate how much Sodium is present in the soil. We also use the Base Saturation to show the balance of cations on the soil colloid. Sodium levels should not exceed 50 lbs per acre and should never be more than 3% of the total cations found on the colloid.

The colloid test is not the only indicator of a potential Sodium problem. Often we find perfect balance on the Base Saturation while the Saturated Paste extract will show a soil solution with excessive Sodium. A high risk for physiological wilt will occur when soluble Sodium levels are higher than 20 ppm in the extract or any time soluble Sodium is greater than soluble Potassium. The Saturated Paste extract also indicates Bicarbonates. Any time Bicarbonates near 50 ppm it indicates that the soil cannot flush Sodium and soil microbes cannot flourish.

The Kick Flush Program is designed to sequester the excess sodium and/or bicarbonates in the soil root zone and pull them out of the soil and away from the root system. Kick, the core of the program, is formulated with over 20 raw ingredients - predominately humic and fulvic acids, which are powerful sequestering agents for sodium and bicarbonates. Gypsum and Cal-Vantage will add sustainable and soluble Calcium into the soil and knock Sodium off of the colloid. The program is completed by watering the treatment into the soil with a surfactant. The surfactant inhibits water’s cohesive tendencies and helps it to flush through the smaller pores in the soil matrix.