The Open was an incredible experience that I will remember a lifetime and I have to thank Pat Finlen for that. Pat is a class act and did a hell of a job on the biggest stage in golf and I say that not because of the EW that he uses (but of course that helps!) but because the Olympic Club was spectacular and Pat does an incredible job, not just for Open but every single day.

To all who bitch about “how the Open is bad golf,” “too hard,” “the golfers weren’t having fun…” all I can say is Shut Up! It is supposed to be hard; that’s the idea! One tournament a year we put the best of the best through an exceptional challenge to see how it goes and this year it went exceptionally well… with the possible exception of the jackass in the bird suit at the end, although that was fitting for San Francisco.

What a scene, over 150 superintendents busting their butts for a week putting on the greatest show in golf. Up every morning at 3 am grinding until the show starts and then…

We were fortunate to be offered the opportunity to sponsor the crew on the first day of the tournament. That allowed me to walk around pretending I was a big shot for a day but it was cool seeing over a hundred crew guys with EarthWorks on the sleeve of their US Open golf shirts! What a scene, over 150 superintendents busting their butts for a week putting on the greatest show in golf. Up every morning at 3 am grinding until the show starts and then back on it until midnight when the big boys go out to the sushi bars for dinner. Just incredible, and again Pat thank you! 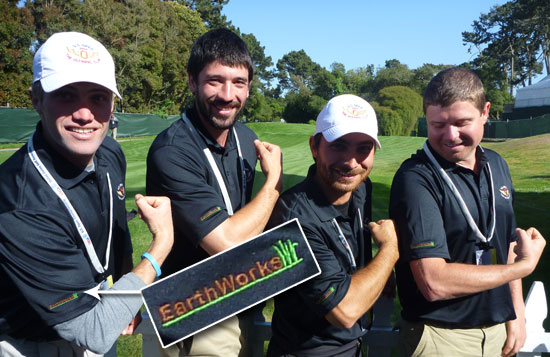 As if no one has noticed, it’s DAMN HOT out there!

OK, my son’s kiddy thermometer hit almost 100 in New Jersey this weekend. In talking to friends in South Carolina it was 108 and in the worst place in the country to grow grass, the Washington DC area (why else would Glenn Smickley move to San Francisco?), it was over 100 degrees. That sucks!

So here’s what happens when your grass finds itself in temperatures that high. Bentgrass curls up in a fetal position sucking it’s thumb crying for mommy and Bermudagrass feels like it drank a bottle of Jack the night before on an empty stomach! Imagine all that on bad compacted soil.

These next eight weeks are everything we work for in the turf industry. It’s like riding a roller coaster;  kind of fun riding up to the top of the big hill but…

These next eight weeks are everything we work for in the turf industry. It’s like riding a roller coaster;  kind of fun riding up to the top of the big hill but it’s scary as hell going around the big bends upside down and really, really fast. The grass plant shuts down when it’s hot and has a hard time producing the carbohydrates it needs to generate the carbonic acids so important for nutrient uptake and microbial generation in the soil. A soil that is chemically balanced, that allows air and water to flow through it, (good soil testing practices) and has a carbon base (Replenish…) so important for building chemical, physical and biological buffers does very well in this horribly hot environment.

The last two summers across the country have been arguably the worst in most of our lifetimes but the guys working with our 555 program (Trilogy, Cal Vantage and Protein Plus at 5 oz./1000 every two weeks) have done incredibly well. What we strongly suggest in these hot dog days of summer is to add another 5 ounce shot of Potent Sea in that greens and tees tank as an added insurance against heat stress and Sea 3 everywhere else. These products, rich in kelp meal and a whole bunch of other important goodies, are incredible heat stress reducers. They are rich in nutrients that the plant can take up quickly and, as importantly, physiological and microbial stimulants that can help the system keep running when the temps are high and your grass plants are in need of a diaper change!

Posted in Joel's Ramblings
← Help Me Understand Something…Fall is for Feeding … The Soil. →